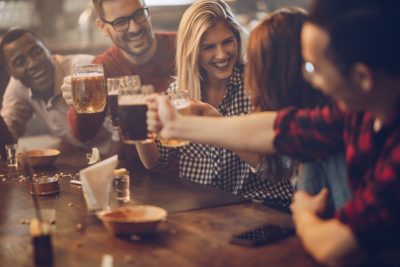 When I was 17 years old, I finished high school and didn’t know what I wanted to do with myself, I had low self-esteem & drank alcohol. I went to a recruitment agency and found myself a traineeship at the local TAFE college. A traineeship program was an entry level job where you not only gain work experience (paid) but you also obtain a formal qualification. Traditionally these programs consist of a range of young people, and when you have a lot of young people together, you do develop quite a social scene and this is where I had my first relationship & alcoholism.

On a Friday night, we would all meet up at the local club for happy hour, at the time I was single and I had a crush on one of the guys in the program, he was 2 years older and had recently relocated from New Zealand to play football. I didn’t realise at the time, but he also had a crush on me.

As he was a football player and he didn’t drive, I would drive him to his different games and afterwards, there would always be drinks. Unfortunately his football career came to an end and he dropped down from the feeder league to more of a ‘social’ league. I think this pushed him into a bit of a depression, and he drank more.

From my very first drinking experience I have always been a bad drunk and never been able to handle my alcohol. As a young adult, my ability to handle my alcohol only got worse. I don’t know why, but I never felt that I deserved to have ‘the hot boyfriend’, I constantly tried to sabotage the relationship due to my own insecurities. Whenever he talked to another girl I would get jealous, in fact I was even jealous of girls he worked with.

When I look back, I never should have been as insecure as I was, I was as much or more of a catch than he was, I just didn’t realise this.

I think like most insecure girls, I made all of the ‘girlfriend’ mistakes, I was needy, insecure, untrusting, called too many times and I tried to cling onto a relationship even when I knew it wasn’t working.

As he was from New Zealand, when he turned 21 he organised a birthday party for himself back home. To this day, I don’t know whether he invited me or I just came along to his birthday, but I will never forget that night. He was from a bad area in Wellington and at the party, I saw an extremely aggressive fight where a really big built guy bashed up a much smaller guy. It was confronting, scary and sobering. Because I didn’t know anyone, and that situation scared me, I started to drink shots.

The next morning I woke up and couldn’t remember the night I had, I knew thought that I had probably ruined his birthday and I felt extreme remorse and guilt for that.

We also went on a Contiki Trip through New Zealand and throughout that trip I drank far too much and gained a significant amount of weight, I would always be insecure about him talking to other girls, especially as I gained weight.

Initially I really wanted that relationship to work, but I realised we were just two different people and I broke it off. The only way I could cope with the break up, was to go out drinking, to make sure that I had well and truly sabotaged the relationship, I got drunk and kissed one of our mutual colleagues. I don’t know if this got back to him, but I was extremely ashamed of my behaviour and this was just one more nail in the coffin of low self-esteem.