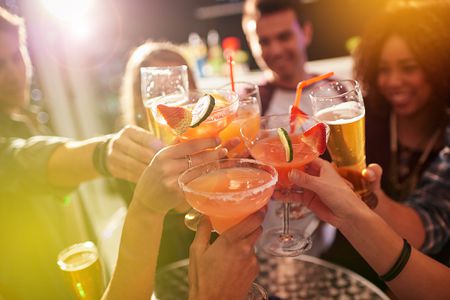 It was always bound to happen, about 1 month ago we got an invitation to the annual fundraising event for my Childs school. It was a standard social event invitation, meals were provided by BYO drinks. One of the major catalysts for my sobriety was my last bender, it had been at a social event with the mums from the school. I got so drunk I can’t remember how I got home. So going to the school fundraiser had me fraught with anxiety.

We arrived at the event and my heart was racing, it was like I was having a panic attack, I’m not used to being in social events like this where I am sober. I said to my husband I’m ok if he drinks, but he said he wouldn’t as he wanted to go workout the next day. As we found our seats, I realised we were going to be put at a table with strangers. When we sat down, I realised we were seated at a table with a girl I met at the school mums event and I had humiliated myself. I immediately felt shame.

As the night went on, people started to drink and it was soon noticed that we weren’t. People asked my husband why he wasn’t drinking, he said he was training for a marathon. I was asked why I wasn’t drinking, and I used the excuse that I had just flown back from interstate and was too tired.

Those excuses worked, I started off really tense and anxious, but as the night progressed I started to feel ok. Instead of guzzling wine, I found myself guzzling water and once I had that water in my hand, I was ok.

As people started to drink, no-one really noticed that we weren’t. Whilst I’m sure we weren’t the only sober ones at the event, It was hard to meet others because the room was so dark and we were all seated at tables.

I overall had a great night, it was really good going out with my husband and the ultimate test of my sobriety. When I look back, I don’t feel like I missed out on anything at all, I actually just felt really proud of myself.

It was funny, this topic came up at my Monday night AA meeting, a lot of people are really scared and unsure of what to do in events like this. The best advice AA Members provide us is to avoid them if possible, particularly in early sobriety, but to also have your strategies with you before you go. Some of the strategies I used to stay sober were:

I won’t lie it wasn’t easy at first to go to this event, but the feeling of succeeding afterwards far outweighed any benefit of drinking. Plus, afterwards I found out many people were resting bad hangovers afterwards, whereas I woke up Sunday fresh as a daisy.