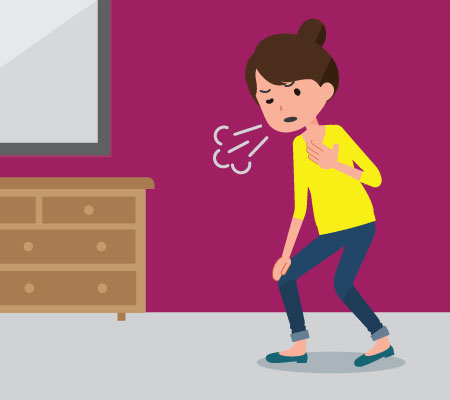 This week I wrote about my experience with my first real physical health scare where I was diagnosed with a pulmonary embolism. Well this week went from bad to worse when on Wednesday, I was not in a good way and felt like I was headed towards a very bad way.

After the initial health scare my husband worked from home, but then he needed to head to Sydney for work, he almost cancelled but we were both convinced that that he was going to be ok and he made arrangements with his parents to be on call.

On the Wednesday morning I woke up and my breathing as instantly laboured and despite taking Endone for the pain, I was in excruciating chest pain. I phoned my in-laws to see if they were available to help, and their horrific response was ‘we are kicking ourselves we are so busy but, unfortunately we have an open house to prepare for and we are unavailable’. I was devastated. I felt all alone, I was petrified, my children are young, my family lives interstate, my husband was interstate and the only people who should be there for me, weren’t.

I phoned another mum that I had met from Kinder and she saved the day, she offered to take my two children for the day and I was eternally grateful. We coordinated the logistics of getting two children to her house and me to the hospital safely all whilst managing the logistics of a potential pick-up.

I went to the hospital, by this stage my anxiety is out of control (as one would expect) and because I had a known pulmonary embolism, I was rushed through admission. I spent the day getting a series of tests, more blood work, more ECG’s and another chest scan and my anxiety levels were through the roof.

The realisation that you are not immortal is really sobering (pardon the pun) and when you have children and other people who rely on you, it’s really confronting. When I first relocated from Brisbane to Melbourne I thought that I was invincible and I wouldn’t need family, but now that I have family of my own, things couldn’t be more different.

I had gone to measures to ensure that my husband wasn’t alerted as to any emergent situation because he was in Sydney, but at the same time I knew he would want to know. Also, reversing the situation, I knew that I wanted to know too if he was in the same situation.

Eventually the time came when I had to tell him what was happening and as one would expect, he was petrified and he did everything he could to get back from Sydney. He was also mortified that his parents had failed our family in our real time of need, especially after he had gone to lengths to tee up support for the girls and I whilst we were away.

After another very long day in the Emergency Department I felt quite relief that my PE’s had not grown and that the pain, shortness of breath and discomfort I was feeling was normal. However, whilst I was at hospital they did identify another issue that would require further investigation. This condition was called a Left Bundle Branch Block and has something to do with my heart, apparently if I was 20 years older and I didn’t have healthy blood work, then I would be at risk for a heart attack. But given my age and overall health, I would be referred as an outpatient to both a cardiologist and a respiratory specialist.